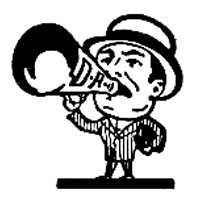 It’s often said that as Middle Children, we feel like we have to try a little harder to be heard. That’s why I’ve always encouraged readers of this blog to comment and share their thoughts. In fact, a number of my most recent posts were the result of feedback from readers, including this one. But it appears the good folks at Blogger.com, and the little company you may have heard of that owns them named Google, are part of a widespread conspiracy to silence us!
A few weeks ago, I received a disturbing e-mail from a reader named Melissa B:


“Hi! You have no idea how much I love, and need, your blog. I have been trying and
trying to post a comment. It will not post!!! I have tried everything. If worse comes
to worst, could I email you my comment and you put it in?”

Then, before I even had a chance to respond, I received this desperate follow-up:

Just what in the name of Jan Brady is going on here!? I immediately dispatched the entire Smack Dab IT department to investigate this issue, and what they we I discovered was baffling. It turns out if you want to comment, you have to click where it says NO COMMENTS. What the what!? Click NO COMMENTS to comment? Doesn’t that seem counterintuitive? Shouldn’t it say something like, oh, I dunno -- maybe, COMMENT?? Clearly, some first or last born HTML coder feeling threatened by the mere thought of a Middle Child speaking out came up with that brainstorm!

In any case, mystery solved. Another satisfied customer. Melissa was kind enough to call me “the renaissance man of Mid Kids,” but also offered this piece of advice. “Be careful!” she warned. “If you get too successful, you might come off more like... a first born.”
Don’t fret, Melissa. That’s not something that will ever happen.


Thank you Melissa for telling me about this scene from Modern Family (Season 2/Ep. 23),
when Claire and Phil are about to miss Alex’s High School graduation speech.
It’s now the newest addition to “Middle Child Masterpiece Theater.”

Posted by SmackDabBlog at 10:03 AM