As Middle Children of all ages brace themselves for perceived Christmas party snubs and prepare to feel like their siblings are getting better (and more) gifts, it's time to tell the tale of what really happened on Christmas Eve. This is definitely not your father's Christmas classic -- unless he also has Middle Child Syndrome!


The Middle Child's Night Before Christmas

'Twas the night before Christmas in some other house
the first born and last born were quiet as a mouse.
The one creature stirring, I probably should mention,
was the Middle Child constantly seeking attention.
The stockings were hung by the chimney with care,
still the Middle Child complained, “Theirs are bigger, no fair!”
While the oldest and youngest were snug in their bed,
visions of hand-me-downs danced in his head.
And mamma in her ‘kerchief, and I in my cap,
were so sick and tired of his Middle Child crap.

When out on the lawn there arose such a clatter,
now what was he up to, now what was the matter?
My wondering eyes through the window could see,
a person I’ve seen many times on TV.
She whined and she moaned, did this blonde haired young lady,
I knew in a moment it must be Jan Brady!
“Marcia, Marcia, Marcia,” I heard her exclaim,
“She gets all the glory, I get all the blame.
If just for one day I could feel like the favorite,
I’d relish the moment, and always would savor it.” 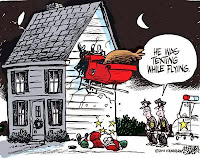 Then if as a sign from some power on high,
a sleigh and eight reindeer fell out of the sky.
That’s when Santa lost all control of his sled,
and hit poor Jan Brady smack dab on her head.
It’s clear what I saw, so it’s true when I’m saying,
that Santa was guilty of texting while sleighing!
Then something surreal happened after he hit her,
I wished I had shared it on Facebook or Twitter.
With a wink of his eye and a twist of his head,
That jolly old man left Jan Brady for dead.

He summoned his reindeer and called them by name
And told them to hurry, before the cops came.
"Now Dasher! Now Dancer! Now Prancer and Vixen!
On Comet! On Cupid! On Donder and Blitzen!”
They flew to the sky as those reindeer did climb,
And dashed away all from their hit and run crime.

The ambulance came with its red lights aglow
to shovel that Mid Kid from out of the snow.
The medics declared after lengthy discussion,
it was clear that she suffered a major concussion.
They concurred that her symptoms would lessen and clear,
but her Middle Child Syndrome was terminally severe.
And as they prepared for her hospital journey
her flash frozen torso was placed on the gurney.


She came to her senses, though clearly exhausted,

and uttered these words as she thawed and defrosted:
“It really does suck being stuck in the Middle.
We always feel like we’re the ones they belittle.
Our siblings are normal, all happy and smiley,
and we end up acting out, twerking like Miley!”
She continued her rant as they bandaged her head,
It is hard to recount all the things that she said.
But the last thing she babbled I clearly recall:

“Happy Christmas,” she said, “Middle Children and all.”

Listen to "The Middle Child's Night Before Christmas.
Posted by SmackDabBlog at 7:07 AM