Poetic Injustice: The Poem That Changed My Life 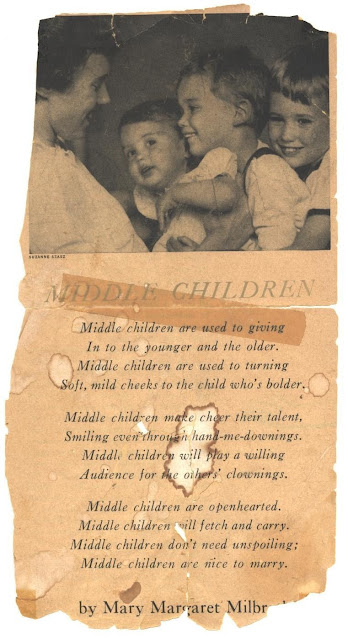 I can’t tell you when it was I came to the realization that I was a Middle Child, but I can tell you exactly where it was: right in the kitchen of the house I grew up in. That is where my mother taped this poem to a wall. It stayed taped there for over 30 years. They don’t make Scotch Tape like that anymore. I always found it ironic, because I’m pretty sure my mother stuck it there to make me feel better about being a Middle Child, but until I saw that poem, I never really even thought of myself as one, or that it was something I might feel badly about. I certainly didn’t think there was anything poem-worthy about it. So why all the fuss? Why the poem? What was it about being a Middle Child that made us so "special" we even came with our own syndrome?
There weren’t any “First Born Son” or “Baby Girl” poems taped to the wall, and that was weird. There was no doubt my brother was my father’s favorite child. My sister, “Daddy’s  Girl,” was a close second. I had a lock on the Bronze medal, a distant third -- but it wasn’t so clear cut with my mother. While it was obvious my sister was her favorite, I thought maybe, just maybe, I might have an outside chance of eking out a second place finish with her.
Perhaps this poem was actually a secret message of support, covertly proclaiming, “You’re my second most favorite child in the world.” An actual analysis of the poem, however, put the kibosh on that idea. Every time I read it, and I read it a lot, I found something new and disturbing about it. It just got worse by the verse:

“Middle children make cheer their talent, smiling even through hand-me-downings.”
Hand-me-downs? This was the first I was hearing about this. Was I not wearing my own clothes? And is this how someone should find out they were wearing someone else’s clothes -- through a poem taped to a wall? That’s messed up.


“Middle children will play a willing, audience for the other’s clownings.”
Nonsense! I have always loved being the center of attention. As a child, I put on puppet shows. I was in talent shows. I had a band. I was a magician, for Christ’s sake. To this day I am constantly making a fool of myself. This poem could not have been about me.


“Middle children will fetch and carry.”
Oh, so now I’m a dog!?! I’ll just put on my brother’s old clothes and go get the morning paper!

As if the poem wasn’t disturbing enough, what about that picture? That kid in the middle looks like 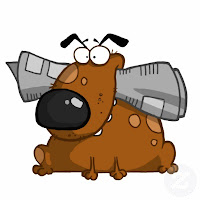 he has a larger than average head. My head isn’t that big, is it? Just what I needed -- more doubt and insecurity. Thanks, Mom. Because of that poem, for the rest of my life I would always be aware of my status as a Middle Child, and wonder whether or not I grew up wearing my brother’s old underwear.
Over the years I thought maybe that poet had it all wrong. Maybe she based that stupid poem on her own big-headed Middle Child, and maybe he was nothing at all like other Middle Children – certainly nothing at all like me. So I did some research. Here’s what some “experts” have to say -- not some poet -- and what I have to say to them:


“Being in the middle a child can feel insecure.”
Really? You need a degree in Psychology to figure that out?


“Sometimes a Middle Child feels out of place because they are not
over achievers and like to go with the flow of things.”
Whatever.


“Middle Children often reach outside the family for significant relationships.”

Ohhh, so that’s why I married my wife and not my sister!

The more I read, the less I wanted to know.


“Middle Children, who are usually smaller than their older siblings while they're growing up,
often learn non-aggressive strategies to get what they want, such as negotiation, cooperation,
or seeking parental intervention.”
You mean like when I kicked my brother in the balls as hard as I could when I got angry with him one time when we were playing basketball?


“The Middle Child often seems to have the most negative impressions of his lot in life. One approach to help Middle Children reframe things is to point out that in a sense they have the best of both worlds. They are both a big brother/sister and a little brother/sister.”
Sure, because that’s what every little kid wants. Two jobs. More responsibility. Please!


“Middle Children tend to be very artistic and creative. The best career move for a middle child would be along the lines of using their creativity. Going into a writing or journalism career, and into a career that they could freely express themselves would be good.”
Okay, maybe I’ll start a blog.
Posted by SmackDabBlog at 2:45 PM