I write this post with equal measures of joy and sadness, as tomorrow marks a monumental pandemic milestone for me. 24 hours from now, I will bid a bittersweet farewell to my #CoronaCoif. That’s right, I’m lopping off my lockdown locks. After 184 days, I’m finally getting a haircut.
I really can’t believe it’s been more than half a year since my last shearing. Apparently time flies even when you’re not having much fun. I would’ve done it sooner, but it took over a month just to get an appointment. Other than when I was a newborn, this is the longest I’ve gone without so much as a trim. And speaking of longest, my hair is now roughly the same length it was in 1974.
My daughter offered several times to cut my hair over the past few months. She gave her husband a few haircuts, and they turned out fine. But his hair... how can I put this nicely? Well, there’s just less of it, so it’s easier to cut. I was confident that if I let her cut mine, she’d be able to handle the back and sides, but it seems the top is where most DIY hair stylists run into trouble. I’ve seen the results on Instagram and Twitter. It’s not pretty. I had to choose between potentially looking like a #QuarantineCuts casualty or a hobo. I opted for the later. 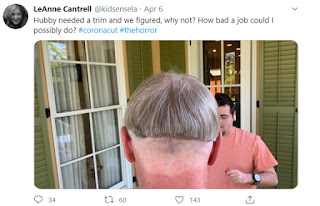 At first, being hirsute was a hoot. A couple of months in, I remember thinking, “Wow, my hair still looks pretty good.” That was back in the cooler days of late winter and spring, when having more hair served a purpose. But as the days grew longer, so did my hair. And then the days got hotter. I felt like I was always wearing a big, hairy hat. Sometimes, in the middle of the night, I could feel our dog nuzzling up against my head. But then I would remember our dog died years ago. It got to the point where my hair had a life of its own. And then one morning you wake up and realize you look like a cross between Emmett “Doc” Brown, Professor Irwin Corey, and Jeff Spicoli.

I got a lot of compliments about my mangled mop top. “It looks retro,” one neighbor told me. “Maybe you should put it in a pony tail,” another suggested. “It’s like Shaggy from Scooby Doo,” a friend observed. At least I think they were being complimentary. Others had a hard time hiding their shock and horror. “You still haven’t gotten a haircut?” I heard often.

I know I shouldn’t look a healthy head of hair in the mouth. I hate to complain. I'm sure there are lots of guys my age who would kill to have this problem. And I have to admit, I did sort of enjoy waking up to see what confused configuration my hair would be in each morning. It was definitely good for a laugh. There’s not a lot going on these days, so that was always something to look forward to. Not to mention, my flawless Farrah Fawcett-esque feathered wings were a sight to behold.
I guess you could say my hair has kind of grown on me over the last 184 days. But that all ends tomorrow. Yessiree Bob. As of tomorrow, my hair returns to pre-pandemic form.

It’s a huge weight off my shoulders.

JOIN THE GLOBAL “MIDDLE CHILD’S DAY VIRTUAL PARADE”
Celebrate Middle Child's Day on August 12 from the comfort and safety of your own home!
Click Here for details.
Posted by SmackDabBlog at 5:04 PM