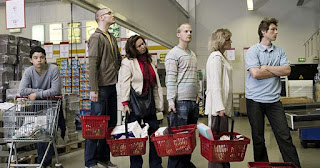 I am that guy. The one you don’t want to ever get in line behind at the supermarket. Not that you’d have many opportunities. I don’t go to the supermarket that often. I don’t like supermarkets. Actually, I hate them. It all stems from my childhood. My mother didn’t have a driver’s license, so when she had to go to the market, we all had to go to the market. Of course, this provided more opportunities for Middle Child Syndrome to kick in. With two parents and three kids, one of us would invariably have to get bumped from a cherished shopping cart seat, so I would opt to wait in the car to avoid the inevitable disappointment. (Don’t worry, they left the window open a crack.)

Whatever. It left a bad taste in my mouth, so now I try to avoid supermarkets at all costs whenever possible.
But on the off chance that you happen to be in a supermarket on the rare occasion that I am also there, do not, I repeat DO NOT get on line behind me. I always pick the wrong line. And I don’t mean one-person-behind-you-in-another-line-got-taken-before-you wrong. I’m talking entire-other-lines-are-no-longer-there wrong. I’m-sorry-but-the-keyboard-on-my-register-has-melted-and-shut-down wrong. Yeah, it’s that bad. If I see someone behind me deciding which lane to choose, I will warn them. “Do not get in line behind me!” They will thank me later.
In any case, as a result of me spending so little time in supermarkets, I’m not very good at it. I have no idea how much things should cost, and I have no idea where things are. So, those few times I’m asked to go, I always come home with the wrong stuff, or forget items altogether, and I have to go back. Which makes me hate supermarkets even more. It’s a vicious cycle. 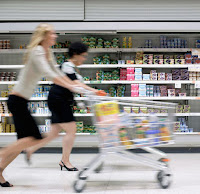 I’m also always so surprised, and disturbed, at the way people behave in supermarkets -- especially at the check-out lines. I can’t believe how cut-throat things get, how people jockey for position and are ready to pounce when a new register opens. How they’ll sprint ahead of someone who was clearly in front of them when the cashier opens a new lane and calls out “Next in line.” Where is the honor? You weren’t next and you know it! You just cut in front of a vision-impaired Senior Citizen with a walker! It’s a dog eat dog world up there, I tell you. Every man for himself. I’m way too sensitive for this.

So I was clearly not at all prepared for what happened when I was at Aldi the other day picking up a single boneless chicken breast family pack which I had forgotten to purchase on my visit to the very same market earlier in the day. I was standing on a line, obviously the wrong line, behind three other people with huge orders. As a courtesy I had already tried to wave off anyone attempting to get behind me, when the strangest thing happened. The lady in front of me asked if I’d like to go ahead of her! I was shocked. This kind of thing never happens to me. I accepted her gracious offer, but was completely unprepared for what was about to happen: the next lady in front of me also asked if I would like to jump the line!! Of course I was

thrilled. Thrilled, yet suspicious. Was this some kind of gag? Was I being pranked on one of those TV shows?? Naturally, I was convinced I would somehow pay the price for my good fortune. I’ll get run over in the parking lot while walking to my car, I figured. Or just as I was about to be rung up, a massive power failure would shut down every cash register on the eastern seaboard. Something had to go wrong. This was too good to be true. And then, it happened.
While ringing up the one person left in front of me, the cashier dropped a banana! It was SO obvious what would happen next. The one person left in line in front of me would slip on it, land flat on his back and require medical assistance. EMS would turn the checkout area into 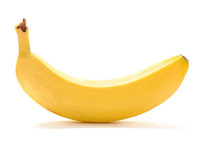 emergency triage and local police would yellow tape the area, questioning the cashier about her role in this potential assault with an unlicensed fruit. I’d be stranded at the register for hours, or maybe even brought in for questioning as a key witness. Or even worse: I’d have to move to another register -- at the back of the line!!
As luck would have it, none of that happened. I breezed out of the market, even escaping injury in the parking lot. But I’m pretty sure I shot my wad when it comes to having any future luck at a supermarket checkout.
Posted by SmackDabBlog at 9:15 AM