The Art of Being a Middle Child

Who is the World’s Greatest Middle Child Artist? 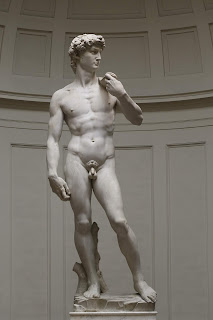 Many of the world’s greatest artists were Middle Children. But it will come as no surprise to anyone that none of their Middle Child masterpieces capture the true essence of what it means to be a Middle Child. For example, let’s start with Middle Child renaissance man Michelangelo di Lodovico Buonarroti Simoni. Many consider him the greatest artist of his time, if not all time. But that hardly makes him the greatest Middle Child artist ever. I mean, look at his most famous creation -- his massive marble sculpture of David.
Okay, so David didn’t have a great childhood -- his brothers treated him like crap, and that’s something many Middle Children can relate to. But things turn out alright for Davey boy. He ends up being a King! According to the first book of Samuel, David was the youngest of eight sons. That means there were a boatload of Middle Children in the family. Couldn’t Michelangelo have sculpted one of them? Would that have killed him? Do the youngest in the family really need more attention? Well, at least he gave David disproportionally small genitals. 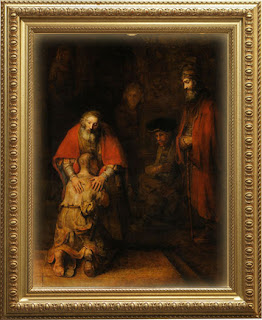 Then there’s Middle Child Dutch master Rembrandt van Rijn. Art historian Kenneth Clark has said Rembrandt's “Return of the Prodigal Son” is a painting “which those who have seen...may be forgiven for claiming as the greatest picture ever painted.” I beg to differ.
According to the parable, the youngest of two sons asks his father for an advance on his inheritance, blows it all, then returns home broke and broken, ready to beg his father for forgiveness. But his Dad is like, “That’s cool. No big deal.” He’s welcomed home with open arms! You just know if he was a Middle Child he would’ve gotten all kinds of shit. If Rembrandt could’ve captured that moment, now that would be something. French impressionist/enfant du milieu Pierre-Auguste Renoir also falls short when it comes to capturing any Mid Kid magic on canvas. His “Two Sisters (On the Terrace)” is a perfect example. Sure, it’s a beautiful painting, but do you notice anything odd about these siblings?
Doesn’t the elder sister look way older than her younger sibling? She almost looks like she could be her mother, right? I’m thinking there might have been a few more sisters in between the two. Maybe even some brothers. Why aren’t they in the painting? What, are we not good enough to be in a Renoir? WTF! 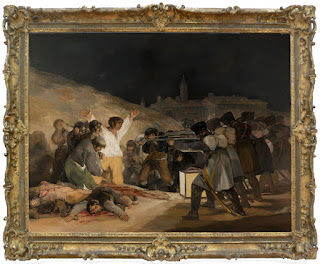 If you think Francisco Goya, the Spanish Mid Kid master of the Romanticism movement, might throw a little Middle Child love our way, think again. According to culturetrip.com, “The Third of May 1808” is probably his most famous work. It depicts the atrocities of war at the hands of Napoleon’s army. Napoleon was a Middle Child, so I wouldn’t say this piece does much to bolster our image. Wouldn’t it have been nice if he painted a positive portrayal of Middle Children? He could’ve called it “The Twelfth of August.” You know, Middle Child’s Day! Geez. 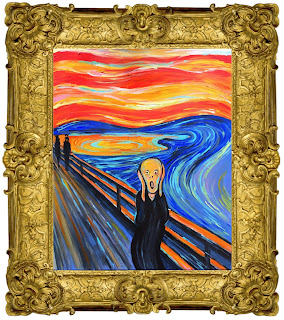 I was beginning to think I’d never find a Middle Child artist who even came close to capturing the Middle Child mindset, and then I found Norwegian expressionist/symbolist Edvard Munch, creator of “The Scream.” Not the movie. The painting, even though the mask in the movie is based on his painting.
Munch’s masterpiece is one of the most iconic images in the world of art. It’s like a modern day Mona Lisa. In 2012, a pastel version of the work sold for $120 million, which remains one of the highest prices ever paid for a painting at auction. Even more impressive: there’s not a single Middle Child who doesn’t know this feeling. And that is something you can’t put a price on.
Posted by SmackDabBlog at 11:28 PM