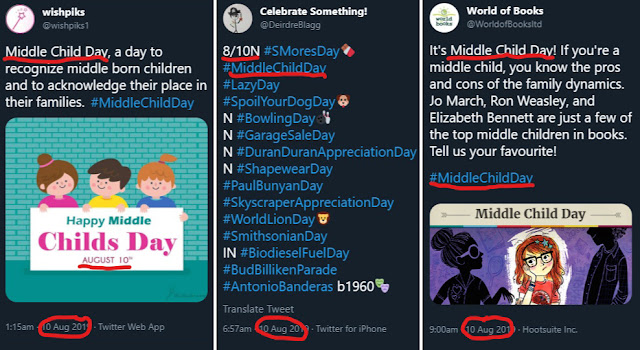 I'd like to think these people were so excited to celebrate, they just couldn’t wait. But I know better. After all my hard work, they still had no idea when Middle Child’s Day was! I suppose I could blame it on a Russian disinformation campaign designed to confuse the public about the actual date of Middle Child’s Day. Sure, it’s disheartening. But at least they were close. That’s progress, I guess. And as I detailed in my previous post, we kinda almost sorta had a parade. That was a misstep in the right direction, right?
Still, I wasn’t sure what to expect when the big day arrived. So I was pleasantly surprised to discover #MiddleChildDay being tagged on tweets all day long. 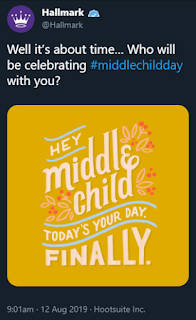 And while it’s not a Middle Child’s Day greeting card -- yet -- at least I know we’re on their calendar. Word of my crusade has even reached all the way to Alaska, as reported by Liz Raines at KTVA in Anchorage. 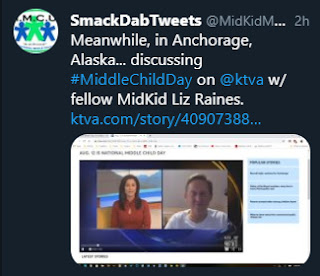 I don’t have any hard numbers, but I can tell you after years of meticulously monitoring Middle Child’s Day mentions on social media, there has been a significant increase since I started my crusade to raise awareness back in 2012. I don’t want to take all the credit, but what else could explain it? And since nobody else is going to take responsibility, I might as well.
Of course, there were the mandatory tweets the day after from people professing to have forgotten Middle Child’s Day... 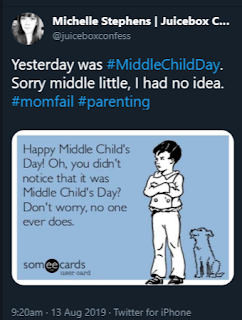 ...but I'm not falling for it. I’m pretty sure they actually knew it was Middle Child’s Day and were just waiting all day for it to be over so they could say they forgot it the next day. Hardee har har. That’s pretty twisted. And not exactly original. My friend Terri Stacy at WIBC in Indianapolis likes to do that every year.

Then there are those who genuinely forgot. Like my sister. Yes, the younger sibling of the founder of the International Middle Child Union. The person who is almost singlehandedly (with a big assist from my parents) responsible for me being a Middle Child in the first place. Yes, her. 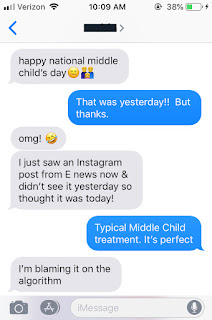 It’s the algorithm's fault? Is that the social media equivalent of the dog eating your homework!? Pretty weak. Still, it’s better than my older brother, who did not acknowledge the day at all.
A more troubling issue is all the Middle Children who were unaware it was Middle Child’s Day, like my nephew. 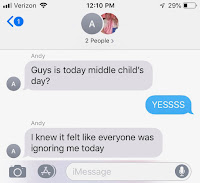 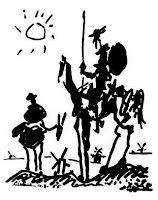 At least he found out in time. But still, if we’re not going to remember our own holiday, well, then -- I give up!! But no.
NO!
I will never give up.
I’m like the Don Quixote of birth order. This is my quest. My impossible dream.
Am I just tilting at windmills? For sure. But these challenges only strengthen my resolve. The struggle continues. I’m dogged, determined, and eager to embrace another year of being overlooked and underappreciated.