The Middle Child's Day Parade That Almost Was

Pittsburgh was a pipe dream... I should’ve known nothing would come of it when a writer from the Pittsburgh Post Gazette contacted me about my effort to find a host city for a Middle Child’s Day parade. “I figure we could have the parade on Centre Avenue, which goes through the Middle Hill,” wrote columnist Brian O’Neill. Middle Hill? Centre Avenue? It sounded too good to be true -- which of course it was. So I moved on. Like water under one of the 446 bridges over the Allegheny, Monongahela, and Ohio rivers. I refuse to dwell on it. I’ll keep my expectations in check.
And then the phone rings...

“Hey, it’s Jen & Frank from WXLO Worcester/Boston,” says the made for morning radio baritone on the other end of the line. “We want to talk to you about a possible host city for your parade.” Surrrre you do. I’m no sucker! Fool me once, shame on you. Fool me twice -- I should probably call them back. So I do.

Wow, they really sound like they mean it. This is huge! I mean, this station is in a Nielsen Top 10 rated radio market. They’ve got musical intros and a logo and everything. Alright, just calm down. This is probably all some kind of Morning Show prank. They didn’t really call the Mayor of the second biggest city in New England, right?
Holy crap, they did!

CLICK TO LISTEN
And, what what -- the Mayor is a Middle Child? Are you friggin’ kidding me!? I don’t want to get my hopes up, but it’s getting real hard not to. And then I get this text:

Wait, are they checking my availability? Is this really happening? Should I be Googling directions to Worcester? And do they actually think I have someplace better to be on Middle Child’s Day?? Okay, okay -- I gotta play it cool. Make them think there might be other contenders. Ya know, like they’re not the only game in town. Play a little hard to get. So I text them back:

And then... crickets. Radio silence. The Worcester Middle Child’s Day Parade is over before it even started. 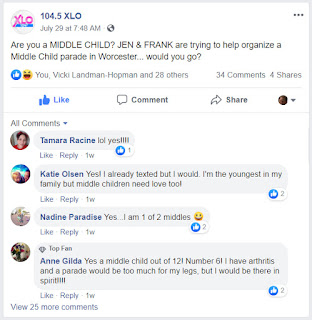 I don’t blame Jen & Frank. They gave it their best shot, but what more could I expect from two non-Middles? (Actually, Frank is a Middle Child, and didn’t even know it. He told me he was a first born, but I later found out he has an older sister and younger siblings! “I’m the first born male,” he explained. Just another classic case of M.C.D.D. -- Middle Child Denial Disorder.) I also don’t blame the Mayor, although it remains to be seen how his Middle Child base will react to this news.
It was probably Russian meddling. Putin loves messing with Mid Kids. Or maybe it was all the fake news on social media.

Whatever.
We got close.
Real close.
Still, like too many Middle Children have experienced too many times before -- there was no cigar.
But it was definitely progress. A step in the right direction. And after all, isn’t that all a parade really is -- a series of steps in the right direction? With a few balloons thrown in. And a crowd.
So I prefer to think our parade has been -- postponed. Yeah, postponed. Sure, probably indefinitely. But it’s definitely not over.


IN CELEBRATION OF MIDDLE CHILD'S DAY,
CHECK OUT THESE NEW POSTS:
“Being a Middle Child is No Game”
“2019 Middle Child's Day Greeting Cards”
Posted by SmackDabBlog at 12:07 AM