Lower Than a Groundhog 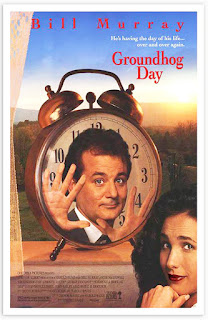 This past Sunday was February 2nd -- Groundhog Day! I know this, because a reminder popped up on my iPhone. I did not enter the date, and I certainly didn’t set up a reminder. It’s a default entry on the Google calendar app, right in there with Thanksgiving and Christmas. Groundhog Day! Like it’s some kind of national holiday.
It’s not like I needed any reminder anyway. It’s kind of hard to escape. It was all over the news. Forget impeachment, Brexit, Coronavirus -- will some woodchuck weatherman see his shadow? We need to know! Geez. They even made a movie about Groundhog Day,  and then a Broadway musical.  It’s that big of a deal. Robert Frost wrote a poem about groundhogs. Robert friggin’ Frost! When the only poet to win four Pulitzer Prizes for poetry writes a poem about you, you know you matter. 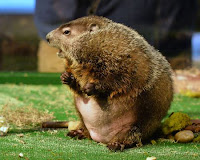 It must be nice to be a groundhog. They must be sooo happy, having a special day with their name on it that so many people pay so much attention to. How nice for them. I mean, how awful would they feel if there was a Groundhog Day and nobody paid any attention to it? Could you imagine?
Oh wait, I can -- it would be like Middle Child’s Day! Which is kind of ironic, because just like Groundhog Day, year after year, it’s always the same thing -- everybody ignores Middle Child’s Day! No headlines. No movie or musical. And certainly no built-in Google calendar entry or iPhone reminder. Sure, there’s that Middle Child poem I’ve written about in previous posts, but that hardly counts. That poem was messed up. But sure, let's all make a big fuss over Groundhog Day because, you know, we wouldn't want to hurt their feelings!
Honestly, is a weather forecasting rodent worthy of more attention than a Middle Child? Actual human meteorologists can’t predict the weather, and we think some grubby groundhog can!? Of course they can’t. Punxsutawney Phil, the world’s most famous furry forecaster, has only been correct 39% of the time over the last 100 years. That sucks!! 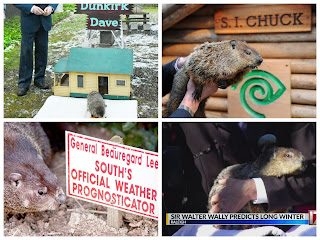 Not to worry though. There are actually other marmot meteorologists we can turn to. Thank god. And while some of them have a better record than Phil, they’re not always in agreement. Take this year, for example. Staten Island Chuck (NY), Buckeye Chuck (OH), and Dunkirk Dave (IN) all agree with Phil. None of them saw their shadows, calling for an early spring. But General Beauregard Lee (GA), Jimmy the Groundhog (WI), and Sir Walter Wally (NC) did see their shadows, which means six more weeks of winter. Now what!?
Maybe Bee Cave Bob holds the key. This Texas weather-forecasting armadillo also agrees with Phil, if that sways you one way or another. And if it does, you have a serious problem. But there’s one thing I can tell you with 100% accuracy: whether any of these creatures saw their shadows or not, Middle Children can expect six more weeks of being overlooked and forgotten.
Probably more.
Posted by SmackDabBlog at 9:35 AM