I’ll be the first to admit it. Like other Middle Children, I’ve done many things over the years to compensate for the attention I felt like I was wrongfully being denied. Whether I was standing on my head singing songs for my grandparents, putting on puppet shows and magic shows for anyone who’d watch, or making an injury appear to be far more serious than it actually was, my Middle Child antics could surely be described as... animated. Did it ever quench my thirst for attention? Of course not. But there is a special group of Middle Children who have earned worldwide adoration by being animated. And I mean totally animated.
While many fictional Middle Children have been immortalized in TV & Film (see this list from Zimbio), the animated Middle Children gathered here are for real! All verified by extensive study of cartoon birth records and analysis of comic strip DNA.
In no particular order, here is the “Smack Dab List of Best Animated Middle Children:”

America’s favorite sax addict is ranked 11th on TV Guide’s list of “Top 50 Greatest Cartoon Characters of All Time” -- tied with her older brother. Intellectually superior to her parents with an IQ of 159, Lisa is the voice of reason in the family, yet feels like an outsider and often wonders if she was adopted. What Middle Child hasn't had the very same thought?
For the most part, Lisa had to raise herself as Homer and Marge were busy dealing with Bart, as seen in “Lisa’s Pony” (Ep.8 Season 3). As an infant, she changed her own diapers. Doh! While this lack of nurturing made Lisa fiercely independent, it also made her feel like her parents don’t understand or support her. When trying to build Bart’s confidence before a golf competition, Lisa tells him, “Having never received encouragement, I'm not sure how it should sound, but here goes: I believe in you.”

The list of famous animated rodents is an impressive one: Mickey & Minnie Mouse, Mighty Mouse, Danger Mouse, Chip & Dale, Rocky the Flying Squirrel, Fievel Mousekewitz, Jerry, Itchy, Speedy Gonzales, and of course, Alvin & the Chipmunks.
The birth order of the singing Seville siblings has been the center of worldwide controversy. Some fan sites suggest Simon is eight seconds older than Alvin. In fact, in “The Sub,” Ep. 29B/Season 2 of Alvinnn! and the Chipmunks, Alvin does refer to himself as the “Middle Child.” But as seen below, all questions are laid to rest in “Grounded Chipmunk,” Ep. 60/Season 6 of The Chipmunks, when Alvin reveals the truth! Having previously established Theodore as the runt of the Seville scurry, Simon is confirmed as the Middle Chipmunk, securing his place as the sole inductee in the Animated Middle Rodent Hall of Fame. 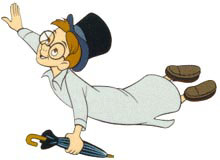 Don’t let the top hat and fancy talk fool you. Although he appears sophisticated for his age, the high flying Middle Darling is a child at heart with a playful sense of adventure, as witnessed by his fascination with pirates. John likes listening to his older sister's Peter Pan stories. He also enjoys playing the part of Captain Hook while his younger brother is Peter when play in the nursery.

Scottish author and playwright J.M. Barrie named John after John Llewelyn-Davies, one of the brothers whose family was the inspiration for the boy characters in Peter Pan. True Pan-ophiles also know John shares the same middle name as the world’s most renowned diminutive Middle Child -- Napoleon.

Born on July 14, 1952, Linus didn’t make his first appearance in the Peanuts comic strip until September 19, 1952. He wasn’t mentioned by name until three days later. How Middle Child is that? Linus has a typical Middle Child relationship with his siblings. Lucy treats him like crap, making him her personal errand boy and often getting physical with him for no apparent reason. She even once took his beloved security blanket and locked it in a closet for two weeks as part of a bet. What a bitch!
Linus is depicted as a loving older brother to Rerun, who he actually named. Upon learning about her new baby brother, Lucy comments that having another little brother is like watching reruns on television, and Linus suggests naming him just that. Rerun is often embarrassed by some of Linus’ more glaring peculiarities. These include, but are not limited to, Linus' unwavering belief in the existence of the Great Pumpkin and his obsession with his ever present security blanket, which he’s often mocked for by other characters as well. His insecurity is further evidenced in his persistent sucking of both thumbs. He insists one is sweeter than the other, by the way. But nothing captures Linus’ true Middle Child nature more than his loyal best-friendship to Charlie Brown. And that cannot be easy.

NEXT WEEK: Middle Children Can Be Very Animated - Part 2

Posted by SmackDabBlog at 1:33 AM