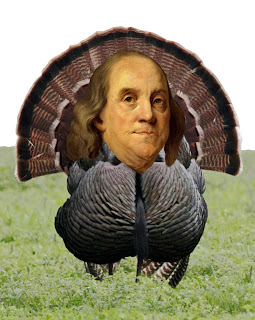 In his lifetime, Benjamin Franklin was known as a printer, politician, philosopher, author, scientist, postmaster, inventor, statesman, diplomat, and founding father. Inexplicably, Middle Child is never included on that list, but that’s another story for another post. Franklin also gets the blame/credit for one of America’s most enduring myths: that he lobbied congress for the turkey, not the bald eagle, to be our national bird and part of the Great Seal of the United States. But I cry fowl, and “Turkey Day” seems like a fitting time to set the record straight.
Ben Franklin did not want the turkey as our national symbol. While it’s true that he did sit on the first committee tasked to find a national symbol in 1776, none of their designs included an eagle or a turkey. In fact, none of their proposals were even accepted. It wasn’t until Franklin was no longer involved in the process that a third and final committee chose the eagle in 1782. Franklin was serving as envoy to Paris when Congress approved the design, so he wouldn’t have even heard the news, let alone had time to lobby congress. The truthless turkey tale was the result of a letter he sent to his daughter two years later. In it, he wrote:


“For my own part I wish the bald eagle had not been chosen as the representative of our country. He is a bird of bad moral character. He does not get his living honestly.”

Franklin goes on to say that an eagle is “a rank coward” and “too lazy to fish for himself,” accusing them of regularly stealing captured prey from other birds. But he doesn’t stop there, and this is probably where the myth took hold. In true Middle Child fashion, Franklin tries to push a few buttons by first suggesting that the bald eagle chosen looked more like a turkey, then adding “the turkey is in comparison a much more respectable bird, and withal a true original native of America. Eagles have been found in all countries, but the turkey was peculiar to ours.” He concludes that unlike an eagle, a turkey “is a bird of courage, and would not hesitate to attack a grenadier of the British guards who should presume to invade his farm yard with a red coat on.”

Granted, it’s kind of ironic that this famous Philadelphian is no great eagle fan, but for all his praise of turkeys, the truth of the matter is Franklin might not have even really liked them very much, either. As Michael Rosenwald points out in a piece for the Washington Post, Franklin’s relationship with these flight challenged fowl was... complicated. “Decades before Franklin was extolling the virtues of turkeys, he was electrocuting them to test the power of electricity,” Rosenwald writes. Yep, apparently Franklin was frying turkey way before it became a thing.
In a letter written in 1750 to a fellow scientist, Franklin detailed his experimental electrical exploits. He noted it didn’t take much “to kill common Hens outright,” but turkeys were a horse of a different color:


“...the Turkies, tho’ thrown into violent Convulsions, and then lying as dead for some Minutes, would recover in less than a quarter of an Hour.”

Egads! Not to worry, though. Doubling the power seemed to do the trick, easily smoking a 10 lb. turkey. Franklin’s final observation was shocking, especially coming from a man who wrote in his autobiography that he became a vegetarian at the age of 16, and once equated eating flesh to unprovoked murder:


“I conceit that the Birds kill’d in this Manner eat uncommonly tender.”

Go figure. And on that note, I wish you all a Happy Thanksgiving. Enjoy your meal!


For more Thanksgiving food for thought, click here.
Posted by SmackDabBlog at 10:53 PM