Profiles in Middledom: #6 in a series, featuring Middle Children (real-life or otherwise) who have earned their place in the pantheon of birth order oblivion.

From the “Tell Me Something I Didn’t Already Know” Department, more bad news for Middle Children -- like we needed more bad news. According to a recent report, “Research Shows That Middle Children Are Most Likely To Be Troublemakers.” Okay, I suppose that’s not the most horrible thing in the world. You can be called a lot worse things than a troublemaker. But a second report on the findings provides a decidedly more gloomy outlook: “Study Finds That Second-Born Children Are More Likely To Be Criminals.” Yikes! That’s quite a leap. From troublemaker all the way to criminal? Isn’t there some kind of middle ground? How about menace? Or rabble-rouser? Scalawag even. Heck, I’d even settle for pain in the ass!
Granted, not all second-borns are Middle Children, and vice versa, so many of us are spared this fate. But here are some that definitely weren’t.

THE SUPREME MIDDLE CHILD: Kim Jong Un has established himself as a fearsome killing machine. His “Greatest Hits” include having one of his vice premiers shot by anti-aircraft guns for
dozing off in a meeting. Another vice-minister was forced to stand on a spot targeted for a mortar round during military exercises and blown up. And when an apartment building in Pyongyang collapsed killing hundreds, the Supreme Leader had the engineers and architects who designed the building executed by firing squad. An ex-girlfriend met the same fate. And according to reports, a special envoy to the United States and four foreign ministry officials were also “terminated” after the recent Hanoi summit with the U.S. didn't go exactly according to plan. 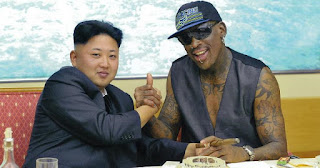 Even relatives are not spared. His Uncle was executed for “dreaming different dreams.” Now that's what I call a bad dream. To remove any trace of his existence, he also had his Uncle’s entire family eliminated. Oh, and a deputy security minister who was an ally of his Uncle was also executed. By flamethrower. But even more criminal -- Dennis Rodman is one of his best friends.

THE ULTIMATE INSTIGATOR: It’s not uncommon for Middle Children to stir the pot in search of attention. “Stop starting up with your brother!” “Leave your sister alone!” I heard it all the time when I was growing up. Sure, maybe Middle Children know a thing or two about pushing buttons, but Gavrilo Princip has earned his rightful place as a world class agitator. When he assassinated Archduke Franz Ferdinand of Austria and his wife, the Duchess of Hohenberg in 1914, it sparked World War I.

THE WRATH OF THE MIDDLE KHAN: Genghis Khan was one of the most brutal and murderous leaders the world has ever known, responsible for the deaths of as many as 40 million people. After one particularly gruesome massacre, the piles of his victims bones were mistaken for mountains. He once disposed of an enemy leader by having molten silver poured into his eyes and ears. That’s one pissed off Mid Kid.
Of course, you don’t become such a deeply feared and twisted figure overnight. His murderous ways can be traced back to his youth, when Genghis killed his half-brother for not sharing his food with him. Even from the grave, the Great Khan remained a deadly force. To keep his burial place a secret, he left instructions that everyone involved in burying him was also to be killed.

COULD THERE BE A WORSE NURSE? When 48 people died over the course of five years in the early 1900’s at the Archer Home for Aged People, an investigation revealed the deceased were actually murder victims, killed with arsenic or strychnine. The trail led to Middle Child serial killer Amy Archer-Gilligan, and not just because her second husband was one of the deceased. It seems many residents began dying only after being convinced to name her in their life insurance policies. And it couldn’t have helped her case when residents of the town reported she purchased unusually large amounts of arsenic to control rats she said were at the nursing home. Oh, there was a rat at the nursing home alright.

SOME MID KIDS REALLY NEED TO BE WANTED: Middle Children have lots of reasons to act out, but Middle Child Jesse James took it to a whole other level. Along with big brother Frank and their infamous gang, he robbed banks, stagecoaches, trains, and did pretty much whatever he felt like doing -- killing almost 200 innocent people along the way. So brazen were these badass bros, they are credited with being the likely culprits in the first daylight armed bank robbery in the United States during peacetime.
Ironically, Jesse was killed by a member of his own gang who hoped to collect a reward on James' head. Instead, he was charged with first degree murder, indicted, pled guilty, sentenced to death by hanging, and then granted a full pardon -- all in one day. Oh, that’s fair.

THE ESCAPE ARTIST: The U.S. Department of Treasury called Joaquín Archivaldo Guzmán Loera (a.k.a. El Chapo) “the most powerful drug trafficker in the world.” Forbes magazine said he was “the biggest drug lord of all time” -- even bigger than Pablo Escobar. But only in his reach and influence. El Chapo, Spanish for “Shorty,” was just 5’6” tall. Still, he was a big time killer, claiming the lives of 2,000-3,000 people. 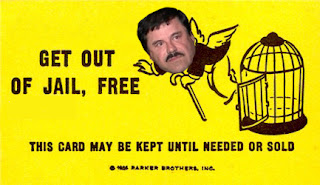 As difficult as it was for authorities to capture El Chapo, it was equally difficult keeping him that way. Over the years, he staged escapes that would make fellow Middle Child Harry Houdini proud. After his first arrest, Chapo broke out of prison by hiding in a laundry cart. After his second arrest, he escaped again, this time through an elaborate tunnel system he had built under his maximum security prison. He was arrested for a third time in 2016, and has not escaped. Yet.


NOW ACCEPTING SUBMISSIONS FOR THE MIDDLE CHILD HALL OF SHAME.
Send qualified candidates to midkidmusings@gmail.com, and I’ll add them to the list.
Posted by SmackDabBlog at 10:08 PM