You’ve no doubt read by now about the demise of the Middle Child: as the ideal family size continues to shrink, there will be fewer and fewer of us around. That why it’s more important than ever to celebrate us!! Make the most of however many Middle Child’s Days we have left by showering us with love and affection -- and PRESENTS!
I’ve scoured the web to bring you the very best in Middle Child’s Day gift ideas. (It wasn’t that hard. It’s pretty slim pickin’s out there.) 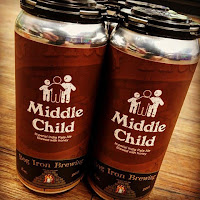 If you’re a Middle Child, you could probably use a drink. (If you live with a Middle Child, you could probably use one too.) May I suggest a lovely bottle of award-winning Middle Sister wine? Yes, I said wine, not whine! Middle Sister wines were inspired by a real Middle Sister, and created so Middle Sisters everywhere can finally get the attention they deserve. I’ll drink to that. Check them out at middlesisterwines.com
Or maybe you’d prefer to share a brew with your Middle Bro on his special day. Middle Child is an American Double/Imperial IPA style beer brewed by Bog Iron Brewing in Norton, MA. It’s a little bitter, but -- of course it is! According to one reviewer who has enjoyed a number of Bog Iron selections, Middle Child is his favorite. Now that’s not something we hear too often. Find out more at bogironbrewing.com

Sure, you want attention. But how about some mints instead? According to their maker, these are not just the mints left over from when they made their other mints. They are totally as good as any other mint and a sweet distraction from being ignored or having your accomplishments diminished. The perfect gift to give as an apology to the child you forgot to pick up at soccer practice a couple of times. Available at mcphee.com and other retailers.

When I contacted the Whiskey River Soap Co. a few months ago to offer them the opportunity to be “The Official Soap of the International Middle Child Union,” they agreed without hesitation. They also reminded me, “No one will notice.” Ah, the sweet smell of invisibility. Buy Middle Child Soap at whiskeyriversoap.com. Also available: A Candle for the Mid


MIDDLE CHILD MUSIC:
If music can soothe the savage beast, maybe it can help relieve Middle Child Syndrome. While many Middle Children are gifted musical artists (J-Lo, Britney Spears, Nikki Minaj, to name a few), music also makes a perfect Middle Child’s Day gift. Here’s some music from just a few of the Middle Child musicians you probably never heard of. How fitting. 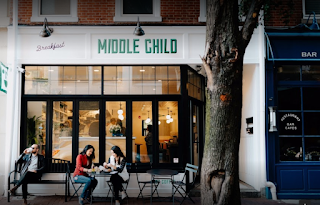 It’s been said that Philadelphia is the forgotten Middle Child, stuck in the middle between our nation’s capitol and the Big Apple. But on Middle Child’s Day, there’s no better place to be. Take your favorite MidKid for a bite at Middle Child, the new star in Philly’s luncheonette revival -- run by an actual Middle Child! Food critics love it, and you will as well. So eat your heart out NY and DC! And first and last borns, too. Find them at middlechildphilly.com or contact at info@middlechildphilly.com


MIDDLE CHILD APPAREL:
If we’re going to be extinct, we might as well go out in style! After all, who knows how many Middle Child’s Days are left? Make every one count with a gift from the Smack Dab Shop, featuring the new SAVE THE MIDDLE CHILD! collection. Stock up now, before it’s too late. Gulp. Click the Smack Dab Shop on the right or go to Cafe Press.

Posted by SmackDabBlog at 1:58 PM